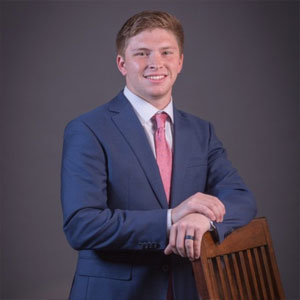 Jeremy Campbell began interning with the firm in 2022 while attending Texas A&M University School of Law. Prospectively, he will graduate in May 2022 with a J.D. and a business concentration. He intends to sit for the July 2022 Bar Exam. As a legal intern, he primarily focuses on civil litigation and local government matters. He has previously interned for a public corporation where he focused on employment law and legislative issues. Additionally, he has held judicial internships and other legal internships with firms that focus on a wide variety of legal issues. He currently possesses a 3L bar card, which allows him to practice in certain areas under the supervision of an experienced attorney

In 2013 at the age of 17, Jeremy enlisted in the Kansas Air National Guard and became a jet engine mechanic. He is still an active member. During his enlistment, he was named Airman of the Year in 2017 by the 190th ARW and graduated number one in his class at Airman Leadership School that same year. The Guard also paid for his college. Jeremy earned a Bachelor of Science in both Psychology and Philosophy at Kansas State University in 2018. While at Kansas State he was the President of the Sigma Alpha Epsilon fraternity and the Interfraternity Council; the organization that oversees all of Greek life at the University. In addition to extracurriculars, he also worked in research labs under PhD students in Psychology.

While in law school, Jeremy served as the Executive Editor of the Texas A&M Law Review and also had his student comment published in the Review. Additionally, he was the President and Treasurer of the Military Veterans Law Society.

Jeremy currently lives in Fort Worth with his wife, Emma.